Posted at 14:14h in Press by invtech 0 Comments
0 Likes
Share

Kings & Associates release “Evergreen” today. And it’s totally lit! The song is from Kings & Associates’ forthcoming album Tales of a Rich Girl, slated to drop October 6. Produced by Seven-Time Grammy-winner Jim Scott, the album promises to be a humdinger. 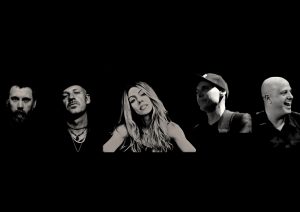 “Evergreen” starts with scamping, twanging guitar riffs and a funky, jazzy blues groove. The bass and drums provide a cool, stylish rhythm rolling with a down and dirty essence. The melody mixes blues with funky jazz, providing a driving, vigorously consuming scorcher of a tune. The emergent organ adds depth and declarative coloration, especially when the melody ramps up. The organ positively screams with bright intensity, giving the music a frisson that’s adamantly brilliant. The combination of the stuttering, radiant guitars and the organ oozes a thickly textured streamlined sonic glow, escalating the melody to the realm of raunchy gospel blues.

Angie Portolesi’s vocals emanate a raw, searing energy of full-spectrum dominance. Her voice reminds me of a hybrid of Gwen Stefani and Debbie Harry. Meld the two together, add muscular resonance and magnetic projection and you’ve got an idea of the lush power of Portolesi’s voice, which is so buff it almost hurts. It’s a voice that emits charged particles of actinic spangles of sonic light that blister skin and singe eyebrows.

Portolesi explains the lyrics of “Evergreen” thusly: “The lyrics, as with most of what I write, come from personal experience. The evergreen speaks to me of health, color and resilience through all seasons and conditions, regardless of what’s happening around.”

“Evergreen” has it going on in oodles! Kings & Associates have produced a tune of exaggerated raw force, a heroic, contagious melody of compelling attraction. The rhythm elements exceed superb, while the harmonics of the guitars and organ exude bright pungency. And Portolesi’s vocals char the air with smoldering, voluptuous heat. “Evergreen” is already on my personal playlist. And I’m preordering the album now. It promises to be that good.

Find out more about Kings & Associates here and here.